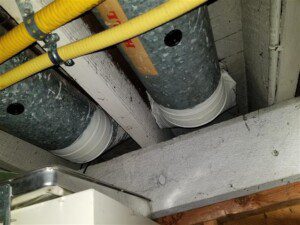 While some materials such as copper have been used for millenia and continue to be used today, others are no longer widely used for many different reasons (lead paint, radium, etc.) One such product that has been widely discontinued and was previously used on a massive scale, particularly in the U.S. in the 19th and 20th centuries, is asbestos. This material was used in numerous building materials as it is an excellent electrical insulator and is very heat-resistant until its detrimental effects on human health was recognized in the late 1970’s.

Discovered by the Ancient Greeks over 2000 years ago, the Greeks noted the harmful affect this material had on those who worked with asbestos. Asbestos is most dangerous when it is damaged and in a friable state, which can allow asbestos fibers to be inhaled. This can lead to mesothelioma, a type of deadly lung cancer. While asbestos can be found in numerous different building products used in most homes built into the 1980’s (and 1990’s for some products), some common asbestos containing products found in older homes include: 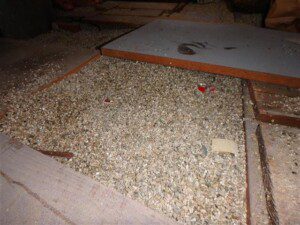 White HVAC duct tape and sleeving is typically easily identifiable and often contains asbestos if it was constructed before 1990. This can be found not only around ductwork, but has also been found around electrical panels. This tape can often be encapsulated or remediated and removed by an asbestos abatement contractor.

Vinyl flooring installed before 1980, particularly 9-inch vinyl floor tiles, often contains asbestos and is usually best left in place unless it is damaged and friable. Other flooring types are often installed over this older flooring if it is not damaged as asbestos is hazardous when it is friable.

Lastly, popcorn ceilings are often found in homes built between 1945 and 1980. These ceilings can have a texture similar to popcorn and should not be damaged or disturbed before being tested to determine if asbestos is present.