The History of Polybutylene: 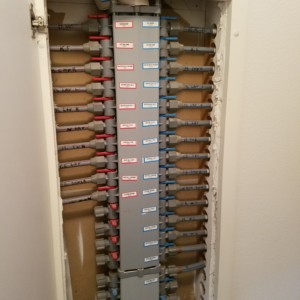 Polybutylene (PB) was manufactured from 1978 to 1995 to be used for water pipes in plumbing systems. Polybutylene is a plastic that resembles the PEX, PVC, and Polyethylene pipes that are still in use today. PB pipes were less expensive than the copper pipes in use at that time and were also easy to install, resisted freezing, and were flexible. Most experts estimate that PB was installed in 6-10 million homes in the United States.

In mid-1996, production of PB pipes was stopped because of allegations that the pipes were rupturing and causing property damage. The University of Illinois at Chicago has published studies that showed certain disinfectants, such as chlorine, can react with the polybutylene and cause it to crack. The disinfectants cause cracks inside the pipe that eventually deepen and result in leaks. The pipes have an unusually high rate of failure under normal operating conditions. Field practice showed that failure occurred much earlier than the expected service lifetime.

Some class-action lawsuits filed against PB manufacturers were successful and the total amount in settlements paid out by the manufacturers was over 1 billion dollars. At this time the Polybutylene Pipe Settlement is closed and all repairs or replacements are the responsibility of the homeowner. (In some cases the homeowner’s policy or home warranty may help pay for replacement.)

What This Means for the Homeowner or Buyer:

Home inspectors are unable to assess the condition of the PB pipes at the time of the inspection. All that we can do is report their presence in the home and report on any visible leaks.

Deterioration of polybutylene pipes happens from within the pipe. The pipes in the home may be in good condition and without any cracks, or they may be compromised and in need of replacement. Typically the only way to observe deterioration is to partially dismantle the water supply system in the home. This is far outside the scope of what we as home inspectors are allowed to do.