In many older homes, it is common to find two prong outlets that were standard when the home was built. However, most newer appliances require an outlet that has three prongs for it to be plugged in. This has led many homeowners to incorrectly install a three prong outlet without properly attaching a ground wire. This can lead to many problems including risk of shock and appliances suffering from power surges. 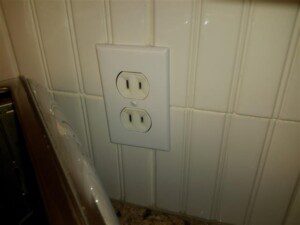 The third prong on an outlet is commonly called the “ground” and its purpose is to give stray electricity an alternative route. On a properly wired receptacle, this minimizes the risk of electric shock and allows surge protectors to be installed to prevent power surges from damaging electrical appliances. Like water, electricity travels along the path of least resistance, which the ground wire provides. However, if this third prong is not properly attached to the ground wire, the only place for the stray electricity to go is along the nearest path of least resistance, which could be an appliance or a person. 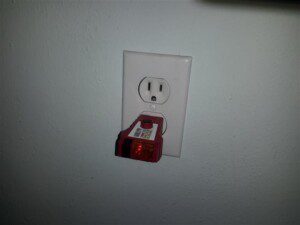 Three prong ungrounded outlet. This is a shock hazard for people and a surge hazard for appliances.

The best way to fix an ungrounded three prong outlet is to make a path for the electricity to run back to the main electrical panel through a ground wire. If your outlet is installed a metal box that is connected a metal conduit that goes to the electrical panel, this option could work for you with minimal effort.  Any work done on an electrical system should be done by a qualified and properly trained person.

In order to find out if this option will work for your configuration, you will need a pig-tail electrical tester, an inexpensive tool that can be purchased at most home improvement stores. While the circuit is energized, connect one end of the tester to the hot wire (which should be in the smaller slot of the receptacle) and the other end to the electrical box. If the tester lights up, then the outlet is grounded and you can install a three prong outlet relatively easily. However, if the tester does not light up, then the box is not grounded. If this is the case, two options are either to add a ground wire that runs to the panel or to install a GFCI outlet. 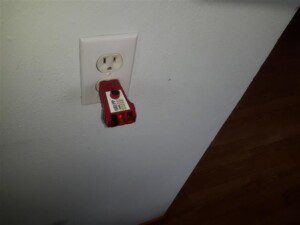 Adding a GFCI receptacle instead of a standard outlet protects against electrical shocks by sensing the difference between electricity entering and returning to the receptacle and will cut off the power supply to the outlet if it reaches a difference of 4-5 milliamps. However, while the GFCI protects against lethal shocks, this option is not quite as good as adding a ground wire since it does not protect electrical equipment. Any surge protectors plugged into this outlet will not protect appliances either, as these require an outlet with a ground in order to function properly.