During the summer, chimneys are often an afterthought that are not given much consideration. Come winter, the warmth and comfort associated with a nice fireplace is something most homeowners look forward to. However, masonry chimneys are an important component in a home that plays an integral role in maintaining a safe living environment.

Clay lined chimney. This is recommended in order to minimize creosote build up.

One of the most important items that can help increase the life and safety of a masonry chimney is the liner that protects the interior. The interior of an unlined chimney is composed of the same brick that is used on the exterior of the chimney. These chimneys are considered unsafe because the rough interior catches creosote and debris that comes with the smoke as it travels upwards. This creosote builds up over time, increasing that likelihood of a chimney fire. Without a chimney liner to protect the chimney’s interior, smoke and carbon monoxide can also enter the home as the mortar between the bricks cracks over time. Additionally, unlined chimneys have draft characteristics that are inferior to chimneys that have liner. 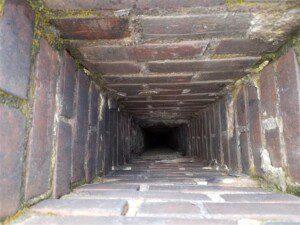 The liner in a chimney serves several functions, such as reducing heat transfer and preventing the deterioration of the masonry. Without a liner, the corrosive byproducts from combustion in the fireplace eats away at the masonry due to its acidity, gradually reducing the strength of the chimney. Liners also reduce the amount of heat that is transferred from the chimney to combustible materials such as the walls that surround the chimney. Preventing this heat transfer is critical in minimizing the chances of a fire starting in the home. 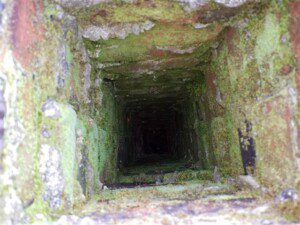 No liner, plenty of moss!

In conclusion, lined chimneys are safer to use because they collect less creosote, help to protect against carbon monoxide infiltration, reduce the amount of heat transferred between materials, and extend the life of the chimney. If you have an unlined chimney in your home, consider having a licensed chimney sweep install a liner.