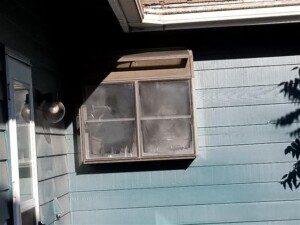 Most modern windows in homes are made up of multiple panes of glass which are separated by air gaps, which are then sealed around the edges by a flexible rubber seal. Insulated Glass Units (IGU) can also contain an inert gas in between these glass panes, such as krypton or argon, which help to prevent heat transfer or loss through the glass panes. Inert gasses, also known as noble gasses, are less heat conductive than a vacuum or air. Unlike older single pane windows, IGU’s can be made up of two or three panes and are also known as insulated windows or thermopanes.

This type of design works well to maintain a clear window and also provide better thermal resistance to heat loss. However, if the seal between these panes in insulated glass units break or if the inert gasses sealed within them leak out, this can allow moisture and ambient air to penetrate inside the panes and this can result in what is known as a broken window seal. Broken seals can usually be identified by the presence of condensation between the panes, foggy appearance, etching in the panes, and discoloration. In addition to making it more difficult to see through the window and being unsightly, broken window seals also can lower the windows thermal resistance to heat loss. In some windows where inert gasses are used and leak out, the panes can collapse inward and even crack. 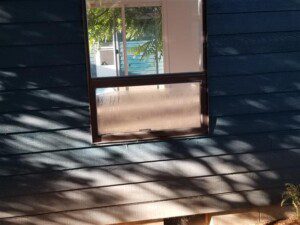 Windows that receive more direct sunlight have increased risk of developing broken seals as the glass expands and contracts through a process known as “solar pumping”. Because of this, windows on the west and south sides of a home can often fail before similar windows on the north and east sides.

The best option to repair a broken window seal is to replace the insulated glass unit and replace it with a new assembly. This is typically best done by a qualified contractor as this requires disassembling the window and determining the manufacturer in order to replace it with the correct window to fit the sash. Before replacing the window, check to see if the window is still under warranty. Many manufacturers carry a warranty on their windows which often range between 3 and 15 years. If the window meets the warranty requirements after being examined by one their technicians, the manufacturer will often cover the replacement of the window.

Another less expensive option is to have the window defogged by a window repair service. This involves drilling a hole in the exterior glass pane and inserting a chemical that dries up the condensation before vacuuming the air from inside the panes. As this does not repair the broken window seal, this is considered a temporary fix and doesn’t guarantee that the window won’t quickly fog up again due to the unrepaired seal.

If the window is difficult to open or close in addition to the broken seal, this may indicate that the hardware is worn out or damaged as well. As replacing the IGU does not fix the hardware or sash of the window, this would be a good opportunity to replace the whole window assembly while the window is already disassembled.