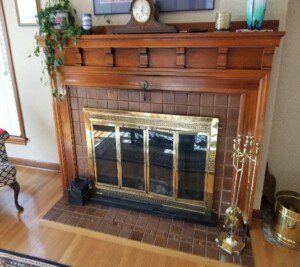 Fireplaces were the first source of heating inside the home.

Prior to the invention of forced air heating systems, residential homes depended on central heat sources such as fireplaces to stay warm. These types of heating systems were rarely effective at heating an entire house.

In the late 1800’s radiator technology was developed which helped to distribute heat to different locations in a home. The first radiator technology relied on natural convection of fluid within a closed plumbing system, which is heated by a central furnace (usually fueled by wood or coal) and was somewhat effective. However, many systems could not keep up with the heat load of certain portions of a home. Also in the late 1800’s, point of use electrical heating was developed, along with point of use gas burning appliances.

Then in 1919, Alice Parker invented and patented the first American central heating system which included a central gas burning furnace with a heat exchanger that connected to distribution ducts. Her system relied on air convection to distribute heat to different parts of the home. By 1935 her system was improved upon and an electric fan was added to force the air through the duct system. This was the introduction of what we now call forced air systems.

In most early versions of forced air ducted systems, metal ducts were fastened and connected with screws and clamps. Most seams at duct connections were not sealed. Although this made the distribution systems less efficient, there was not much concern with air leakage at duct connections since the forced air systems were adequately heating homes. As time went on, and fuel resources became more expensive, people decided to find out ways to make heating distribution more efficient. 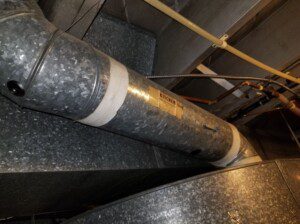 In the 1920’s – 50’s duct installers started to use tape at duct seams. Although this helped to reduce air leakage, many manufactures added asbestos in their tape, which is a hazardous material. There are many homes that still have asbestos tape on duct work (usually a white fabric material). In most cases, the tape can be encapsulated with duct mastic or metal tape, which could reduce the risks associated with asbestos exposure (these materials should be handled according to EPA regulations and standards in order to prevent exposure to asbestos fibers).

Once use of asbestos tape was discontinued, manufactures started offering other types of tape that was used to seal ducts. Hence the creation of “duct tape”. However, it was found that over time, duct tape adhesive would fail, and the tape would fall off of the ducts causing air leaks. Ironically “duct tape” is actually not the best option when sealing ducts. 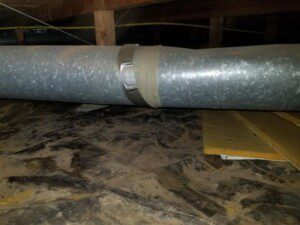 Modern products such as metal tape are a better option, but the best way to seal ducts is to use a water based mastic. The mastic can be painted or smeared onto the metal duct surface, which dries and creates and airtight seal at duct connections.

Sealing duct work is not only important in regard to energy efficiency, but can also help to better control indoor air pressure, and comfort in the home. Sealed ducts can also help to improve indoor air quality by preventing dirty air from attics and crawlspaces to enter into a home through ducts leaks.

Duct sealing is something that most home owners can do, and is an easy DIY project that can help to make a home a more healthy and comfortable place to live, and can also save money in heating and cooling costs. Below is a video showing how to use duct mastic to seal ducts.