The unassuming valve and discharge pipe on the exterior of water heaters are some very important parts of the home, preventing extremely dangerous situations from arising. The temperature-pressure relief valve (TPR) can be often overlooked, but its presence gives water a place to escape should the pressure become too high. This prevents potential explosions, resulting in a water heater being sent hurtling upwards, spraying super-heated water as it destroys everything in its path. Water becomes super-heated if it passes the boiling point in a pressurized area, instantly turning into steam when it becomes exposed to the atmosphere and occupying nearly 1,600 times its original volume. This gives these explosions extraordinary power and have been known to even crack foundations. 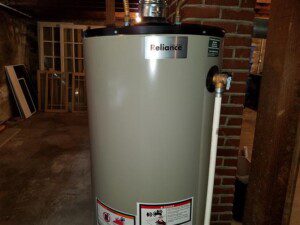 TPR valve and discharge pipe on right side of water heater.

TPR valves are installed to help prevent these catastrophic explosions by releasing water before pressure becomes high enough to do damage. Water in a heating tank expands as it is heated, pushing outwards and towards areas of low pressure. This usually means it expands either into the municipal cold water inlet or into an expansion tank. However, if the pressure continues to mount, the TPR valve plays its role.

TPR valves are composed of CPVC, copper, galvanized steel, stainless steel, polypropylene, or polyethylene. Use of PVC is unadvisable as this plastic will melt easily and does not not stand up to high water temperatures. The opening should not be any smaller than ¾ of an inch and should not reduce in size from the valve to the end of the discharge. The discharge pipe should end no higher than 6 inches above the floor in most jurisdictions and should drain with the flow of gravity (Oregon’s plumbing code is unusual in that it indicates that the TPR valve piping should terminate between 6 and 12 inches above the floor). 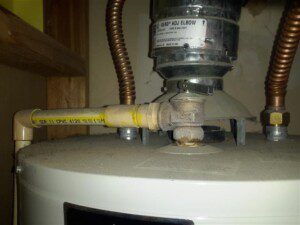 TPR valve on top of water heater. The CPCV piping is too close to the hot exhaust as well.

In conclusion, the TPR valve is an important part of a water heater assembly and should be tested regularly. Monitoring of older water heating units is advisable, as these are the most likely to have issues in the future. 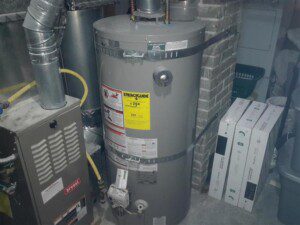