Once a common form of heating in Portland, oil fueled furnaces have become largely replaced by gas and electricity as a primary source of heat. Oil furnaces required large amounts of oil to continue functioning and these tanks were often placed in areas out of the way of everyday activities. This usually meant placing these tanks underground in most cases. These tanks came in a wide range of sizes depending on the needs of the home, sometimes coming in sizes as large as 700 gallons or more. These tanks are usually composed of steel, which deteriorates over time. This means that older tanks are susceptible to environmentally hazardous leaks. 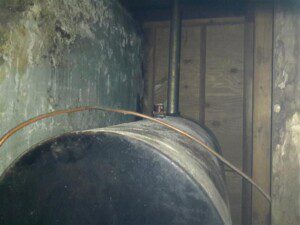 Locating these tanks before they leak prevents environmentally hazardous oil from contaminating the surrounding soil and groundwater, which can lead to a costly cleanup operation. If an unused tank is located that has not leaked, then all remaining oil should be removed by a licensed contractor and the tank should be filled with sand in order to prevent collapse. If the tank has already begun leaking, a contractor who is licensed by Oregon for oil tank clean ups should be contacted.

One way to determine if an underground oil tank is present is to go to PortlandMaps, https://www.portlandmaps.com/, a website dedicated to permits and related information in Portland, Oregon. This is an excellent source that has thousands of records available. However, not all of Portland records are available. If your address does not have all records available, there are other ways to search for signs of an oil tank, which will be covered in the last section.

1. PortlandMaps:  After entering the address into the search bar in the upper right corner, scroll down to the tab labeled, “Permits & Zoning”.

2. After clicking on this tab, click on the button labelled, “Permits”.

3. Scroll down until the area labelled “Underground Storage Tanks”.

If the address has record of an oil tank, one or more ID’s will appear as links to the individual permits, listing the permit number, tank location, and tank capacity. 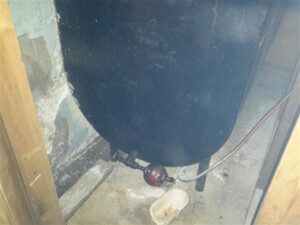 If there is a permit listed for an underground storage tank, the next step is to find out if it has leaked or been properly decommissioned.

1. The first step is to go to: http://www.deq.state.or.us/lq/tanks/lust/lustpubliclookup.asp

2. After typing the address of the property into the search bar and entering, click on the link of numbers under the “Log Number” tab.  (Hint: Just typing in the numbers of the street address will provide the best results.)

If the address had no supplied permits or the location/existence of an oil tank is inconclusive, there are a few other ways to determine if an oil tank exists and if it is leaking or been decommissioned. 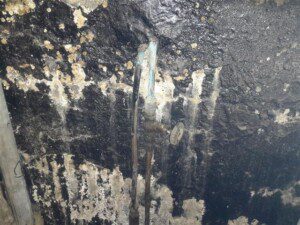 There are some common signs that can help to determine the existence of an underground oil tank.

Two copper tubes protruding from the ground in a basement or yard is an easy way to determine if an underground oil tank existed on the property at some point in time.

Dead patches of grass can also be a sign of a leaking oil tank, as the oil poisons the vegetation around it.

Ultimately, the only way to know if an oil tank exists on a property for sure is for a contractor licensed in Oregon for oil tank inspection to do a sweep of the area. This contractor can also do soil samples that will indicate whether or not the tank has been leaking.  Because it can be an expensive repair, investing a small amount of money to get a tank sweep and soil samples done prior to closing is a wise choice for any home buyer.